For most, summer is time to unwind and relax but that’s not the case for the Illini 4000 team. A team of dedicated and hard-working student cyclists are riding bikes across the United States to raise money for cancer. They begin their journey in New York City and will ride to San Francisco, going through 15 states and covering more than 4000 miles. This year’s I4K consists of 20 riders, nine of whom are College of Engineering students: 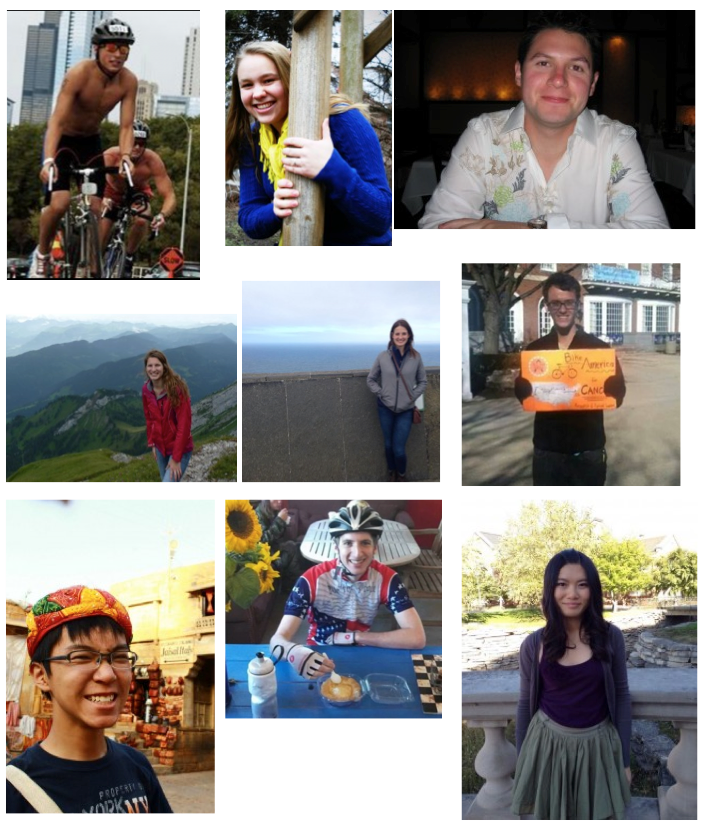 The students have been preparing and training for the ride since the beginning of the 2013-2014 school year. Figuring out where the team will stay every night was key to preparation. Logistics committee member Josh Weisberg, an Industrial Engineering student, said he contacted churches in California, Nevada, and New York for weeks to figure out overnight arrangements. In addition to churches, the team stays at schools, community centers, and even in individual people’s homes.

The generosity of others contributes to the success of the trip in more ways than just providing food and shelter. Fundraising is crucial to I4K. Rider Grace Deetjen, a sophomore in Bioengineering, said that for part of her fundraising, she and fellow rider Shiqi Fu, a junior in Chemical Engineering, would stand out on Green Street and sell cookies. Grace said, “I made $300 in one night. It was absolutely insane.” So far the team has raised more than $80,000 and plans to reach a goal of $150,000 by the end of the summer.

Early training was essential to the team’s preparation. The team had mandatory training for two hours on Saturdays and one-hour training sessions during the week. The training consisted of a variety of cardio, endurance, and strength exercises. Bike training began on April 5th. They completed a 30-mile ride and increased their mileage in 15-mile increments every Saturday until they reached 90 miles on Saturday, May 3rd.

Although the team trained hard and prepared as much as possible, there is only so much they can do to be ready.

Rider Blake Landry, who is completing a Ph.D. in Civil and Environmental Engineering said, “ You can always train more. I don’t think you could ever be fully prepared for this. Many days are going to be tough and difficult. That grit and determination will get the team through those hard days. To do that, the team must remember why they are riding.”

The Portraits Project is a compilation of stories that they collect along the way as inspiration for the ride. The team gathers stories of current cancer patients, survivors, and caretakers they interact with on the ride. After the ride, the completed portraits will be displayed for the community to see. Sharing them will spread hope for a cure and might even motivate others to join the fight against cancer.

To donate to the Illini 4000, visit their site.

Sorry but comments are closed at this time.

The Engineering at Illinois family does amazing things. Incredible, innovative, life-changing things. Field Notes is a way to tell their stories. It's a way for you to learn about the unlimited opportunities available to our students and the cool jobs held by our alumni. It's an avenue for inspiration, knowledge, and networking. So take a look and see the good being put forth by these incredible Illini Engineers.